Wireframe shows how will the UI of your product look. It does not have any sophisticated visual design, in fact, it can be drawn on a piece of paper.

What Is a Wireframe

A Wireframe is a technical and visual representation of the UI. It ignores any visual design and focuses only on the content and the structure of the UI. Wireframing can be done by sketching it on a piece of paper or a whiteboard as well as by creating it in graphic design software.

Creating a graphic design can be very time-consuming. The Wireframe shows quickly if the scheme or the information hierarchy of the UI is correct.

Wireframes create a clear picture of the elements that will be developed. This tool is fast, cheap, and impermanent.

You can use the Wireframes to:

How to Implement the Wireframe

As mentioned earlier, the Wireframe can be drawn on a piece of paper so it can be created very fast. It is important not to go into too many details. The Wireframe should be customized for the target group. For example, a user prototype needs to have a real content - high fidelity, but a graphic concept without any real content is enough for stakeholders - low fidelity. The Wireframe does not define the final look of the UI. It shows how the UI will work. 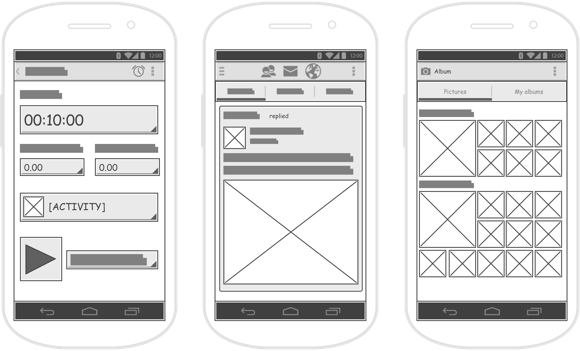 Source: Visual Paradigm: How to Draw Wireframe for Android Apps?

Make your life easier and pick a tool for Wireframing, such as:

It is common that the developers skip the Wireframing and create the UI directly. There is a risk of making some mistakes and it is more difficult and expensive to change it. When you present the Wireframe to the stakeholders, you can get stuck on the look of the Wireframe. This can be a result of the following examples:

Resources for the Wireframing

Clickable Prototypes are interactive demos of a website or a software application. These are often used to gather feedback early in the project lifecycle, before the project goes into the final stage of development.

A Value Proposition Canvas is a model that helps to ensure that a product covers customer’s requirements. It defines the customer segment and the value proposition.

A Lean Canvas is a 1-page chart with 9 basic building blocks. It helps to identify problems and solutions for your product.

A Design Sprint is a framework that reduces the risks associated with product development. It is an intense process done by a small team in just 3 - 5 days.