Smoke Testing aims to verify if the most important product features really work. This term was used during testing the hardware and the product passed the test when it did not burn or smoke. How to create an efficient Smoke Test? Read this article!

What Is Smoke Testing?

A Smoke Test is aimed to verify that the most important features of the product really work. This term was used during testing hardware and the product passed the test when it did not burn or smoke. Smoke Tests are a subset of test cases which cover the most important functionalities of the product. They also typically answer basic questions like "Does the application run?" or "Does activation of a new functionality do anything?" The advantage of the Smoke Tests is in the speed of verification or obtaining a result.

Smoke Testing helps reduce the risk of major product errors. It is usually performed before the start of functional testing of the application, which helps to reduce the cost of testing itself and repairing functional errors.

Smoke Testing is typically used for:

It is always a good idea to apply Smoke Testing from the user experience point of view, for example, if we run an e-shop, the Smoke Test should be focused on the main functions, such as the user's ability to log in, or if he adds goods to the "basket", so it appears there indeed, and so on.

How to Implement the Smoke Testing

For the correct application of Smoke Tests, the following rules apply:

Example of the Smoke Test: 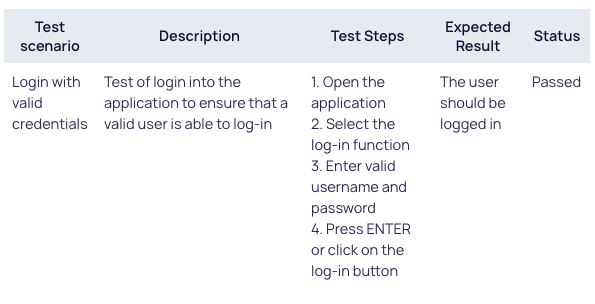 Common Pitfalls of the Smoke Testing

Resources for the Smoke Testing

Unit Tests are a foundation of your testing. They test the smallest pieces of code called units that have to be isolated from a system. Unit Tests are small, cheap and easy to maintain. The number of Unit Tests outnumbers any other types of tests.

A Pilot Project is a small-scale version of your larger project that helps you catch potential errors before the full implementation.