What is Integration Testing? 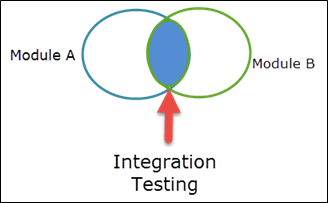 Source: Guru99.com - What is System Integration Testing (SIT) with Example

Each component of the software or application is tested together. For example, if an application has four different modules, then all these are tested concurrently.

Top to Down Integration Testing

All the components are tested from top to bottom with a control flow and architectural hierarchy.

In bottom-to-top integration, the components can be developed and tested simultaneously. The last component is established and tested at the same time.

Stubs and drivers are developed and used in incremental integration testing. All programmers are added one by one, and then testing is carried out.

Powerful software and applications are examined by using the black box technique. It is essential to inspect each element of the software accurately. The integration team can perform the software/app testing with the help of black-box testing. In this way, the team tests the links, buttons and scrolls through the user interface. They usually don't need to mess with the coding or back end.

Integration testing consists of two or more modules of a software or application, while system testing is complete software testing before final submission.

Integration is the second phase of testing combinations of different software components and their interaction. The prime objective of I & T is to find out the flaws and defects by integrating various components.

For example, You are interacting with an E-Commerce app. You wish to buy your favorite T-shirt. Then you find it out through the products and add to the cart. Now you have to pay the required amount with an integrated payment gateway. You get a purchase message like Thanks for purchasing with us. This is a sequence of actions controlled by different modules. Integration testing performs checks of components to keep them integrated and functional.

What are Stubs and Drivers?

Dummy software programs are required to accomplish the testing activity.

These temporary software act as substitutes for the missing models. Which are not in the development program but necessary for module functioning. Just the data simulation occurs while calling from the under-test module.

Why is the Integration Testing Plan Mandatory?

How to Implement the Integration Testing

Integration depends upon the teams and scenarios in a DevOps environment. The testing team may consist of designers, developers, testers, or any other members assigned by the management.

A software project is typically divided into three parts.

Integration testing falls under the validation category. Its primary objective is to check the segments of a module. The linking, connection, and communication between the components is the principal target of this testing.

Implementation of integration testing is done through the following steps.

There are two types of planning for integration testing.

Once the client submits his project requirements, the management team analyzes them thoroughly. The management also decides which types of testing are to be carried during the project progress. However, it is dependent on the project, team, and the situation.

If the management adds the integration testing in the project outline, then individual planning is implemented. It includes the following.

The team logs all the data during execution. It helps in analyzing the errors and performance during the integration of the modules.

The responsible individuals rectify the potential defects faced during integration testing. Then the testing team retests modules and all infected components for successful integration.

Numerous resources and tools help the testing team to execute their testing plans. Below are some of the most used tools.

Citrus is a java written test framework. It is used in the integration testing of message-based EAI applications.

It is a test aimed to verify that the most important features of the product really work. This term was used during testing hardware and the product passed the test when it did not burn or smoke.

Test cards help you to test and validate your business ideas by defining how you will test them, what you will measure, and what success looks like.

A staged Rollout enables you to release the upcoming product version slowly in a gradual way. You can slowly increase the percentage of users who receive the update.