Waterfall model sees the software development as a set of tasks that need to be finished before moving to the next one. Like a waterfall, everything moves strictly downwards (or in one direction). This method is often criticized for it's rigid structure and Agile is widely mentioned as an opposite approach.

The Waterfall methodology is a linear project management approach where customer's requirements are collected at the beginning of the project. Then the Project Manager creates a sequential project plan to satisfy those requirements. The concept was first introduced in 1970 by Winston W. Royce. It was quickly adopted in a variety of industries due to its logical sequencing and easy implementation.

Problems the Waterfall Helps to Solve

How to Implement Waterfall

The Waterfall model follows several phases in the sequential order:

All these phases are cascaded to each other, flowing steadily downwards (like a waterfall) through the phases. You can move to the next phase if the previous one is successfully completed. Usually, you could not revert back to the previous phase perform any change. The phases also do not overlap. 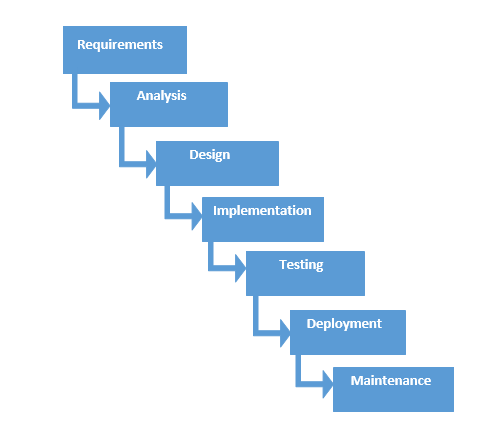 Disadvantages of the Waterfall mentioned above tries to solve Agile methodologies, such as Scrum, Kanban, or XP (Extreme Programming).

Agile Events are necessary meetings for keeping up the good work. They are usually time-boxed and the most common Agile framework that uses these periodic rituals is Scrum.

Scrum is an agile framework focused on a productive and creative delivery of complex products with an emphasis on the highest possible value. Scrum is lightweight, simple to understand and difficult to master.

Extreme programming is a software development methodology that promotes quality and encourages collaboration.

Kanban is a Lean method similar to Scrum. It is focused on managing a continuous delivery of products with avoiding the "bottleneck effect". It helps teams work together and more effectively.